History of car companies in India

Before the independance of India in 1947, complete cars were imported into India. There were some attempts at local assembly of cars with imported CKD kits (completely knocked down kits), but very few of these were made and sold in India prior to Indian independence. Before India's independance, the Maharajas of India imported some of the most expensive cars in the world into India, and today these are some of the world’s best collection of antique cars.

The first Indian produced car was the Hindustan Ambassador Landmaster in 1955. After independence the policy of the government was not to allow the imports of completely or partially assembled cars. Even CKD kits to make cars were not allowed.

This was the time of the License Raj and new entrants were not allowed into the automobile industry in India for a period of almost 50 years post Independence. Thus the Hindustan Ambassador and the Premier Padmini ruled the Indian roads. There were no model changes for these cars, the only changes made were cosmetic, mostly made to save costs, like cutting down on chrome grills, cheaper lights and so on.

The Government during these 50 or so years considered cars a luxury item. The number of cars a company can produce was restricted by the licensed capacity. Government also controlled the price of cars. Thus during this period, if someone wanted to buy a new car, the waiting period was something like 2 to 3 years, and it was common practice in those days, to book a car by paying a token advance and reselling the booking when delivery of the car was near. The premiums paid for reselling the booked car at the time of delivery was, most of time, more that the cost of the new car itself. Such was the pent-up demand for cars in those days of License Raj and Socialist policies in India.

The start of the Indian car Industry liberalization can be attributed to the setting up of a company called Maruti Ltd by Mr. Sanjay Gandhi in June 1971. This was the time when Sanjay, Indira Gandhi’s son, was all-powerful with almost dictatorial powers. He had the Government of India’s mandate, with an industrial license, to make a people’s car in India. Sanjay Gandhi’s dream was to emulate the success of the Beetle car of Volkswagen Germany, in India (‘Volkswagen’ literally means People’s car in German). The early death of Sanjay Gandhi on 23 June 1980 put an end to all these plans and Maruti produced no cars during Sanjay’s lifetime.

After Sanjay’s death, Indira Gandhi encouraged the formation of a new Company called Maruti Udyog Ltd and entered into an agreement with Suzuki of Japan to jointly produce cheap small cars in India. Suzuki was given 36% shares of Maruti Udyog Ltd. Mrs Indira Gandhi herself, in 1983 ceremoniously sold the first production car of Maruti Udyog Ltd. to Mr. Harpal Singh, who got the allotment through a lucky draw. The picture of the first sale of a Maruti car is below and below here you can see the proud owner Mr. Harpal Singh, posing in front of that first car which he still using in the 2010s. 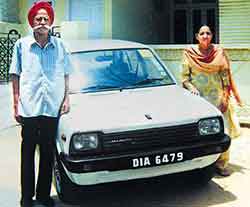 The Maruti 800 brought in a sea change in the Indian car buyers mind, they now got to know what a modern car is like, instead of the dinosaur prehistoric cars in the form of the Hindustan Ambassador and the Premier Padmini cars. Public opinion wanted the Government to open up the car industry and the first changes started to happen in 1985.

The Government of India started giving new licenses for car and three wheeler manufacturing. New model cars started appearing in India. Standard Motors, which had stopped production of cars some years back, came back to the market with their Standard 2000, a big car by Indian standards based on the Rover SD1 UK car design. Hindustan Motors added a new model called ‘Contessa’ in their range. Premier Automobile had new model, the new Fiat 118NE. Although these were new model cars in India, they were still based on outdated cars, which the Indian carmakers could get cheaply. The Government still had restrictions on the amount of foreign exchange the car companies could use.

It was in 1993, that Indian car industry was finally freed of the restrictions of the license raj. All the major car makers of the world rushed in to set up production facilities in India. Finally, we Indians, could use modern cars. The socialist thinking held back India from progress for five decades. With the opening up of the car Industry in India, the benefits gained by India are many: more employment, fuel efficient cars which are good for the environment, thriving auto ancillary industry which is now one of the world’s largest exporters of auto parts and finally the satisfaction of millions of Indians to own a good car. The car industry in India, instead of being a foreign exchange drain, will soon become a nett foreign exchange earner with increased exports, while at the same time providing huge employment opportunities for Indians.

NOTE: As an Amazon Associate I earn from qualifying purchases